What If… Someone Came Up With an Original Idea Around Here?

10 Story Ideas from Issues of Marvel’s What If…? Series That Later Found Their Way Into the “Real” Marvel Universe

1. “What if… the Hulk Had the Brain of Bruce Banner?”
(Vol. 1, No. 2, 4/77)
Long before alternate-reality titles like Marvel Zombies were all the rage, Marvel’s What If…? series (debuted in 1977, revived in 1989, and later brought out as a series of mini-series in the 2000s) offered Marvel fans a regular dose of the road not taken, presenting twists on pivotal moments in Marvel history that took familiar characters into uncharted territory. Often, though, ideas that were once considered outside the official continuity would later be adopted by writers eager to shake things up in the “real” Marvel universe. Case in point: this Roy Thomas-scripted What If…? tale that showed the Hulk displaying a slightly higher IQ than readers (and television viewers) in the 1970s came to expect from ol’ Green-Genes. It was a radical idea at the time, but later issues featuring the canonical Hulk would depict him retaining Banner’s intelligence at least twice: once in the early 1980s (when President Reagan pardoned the Hulk for the billions of dollars in property damage he caused) and later during Peter David’s tenure, when Banner dealt with his multiple-personality issues and the Hulk morphed into a witty, well-mannered superhero. Neither version really stuck, which is just as well — despite Dr. Banner’s assertions, we do like him better when he’s angry.

2. “What if… Rick Jones Had Become the Hulk?”
(Vol. 1, No. 12, 12/78)
In the Hulk’s origin story, Rick Jones is the teenaged numbskull who drives out on the testing range just as Banner’s gamma bomb is about to detonate; Banner pushes the teen into the safety of a trench but gets caught in the bomb’s full blast. In this story, Rick is the one who pushes Banner into the trench and becomes the Hulk. The usual chaos and carnage ensue. “Rick Jones becomes the Hulk” is a theme that writer Al Milgrom would briefly revisit in 1986, around the time Banner found a way to separate his two identities into two bodies. It didn’t last long, and Rick was soon back to his freewheeling, sidekicking ways while the Hulk ended up… as a Vegas mob enforcer? Man, those were trippy times.

3. “What if… Phoenix Had Not died?”
(Vol. 1, No. 27, 7/81)
“The Dark Phoenix Saga” is one of the best-known X-Men storylines, and for good reason: you just don’t go and kill off one of your stars every day (at least, you didn’t back in the early ’80s, when this story first appeared). In the original storyline, an all-powerful and barely-in-control Jean Grey commits suicide to prevent herself from causing any more deaths (a decision dictated by editor-in-chief Jim Shooter, who vetoed an earlier story draft that had a de-powered Jean return to the X-Men). A few years later, when Marvel decided to reunite the original X-Men team in a new title (X-Factor), they brought back Grey by explaining that she was never actually Phoenix in the first place — the Phoenix force, an ancient cosmic entity, copied her form and committed the evil acts whilst Grey was safely comatose. So she never actually died, and the Phoenix force — well, let’s put it this way: when something is called the Phoenix force, can you really act surprised when it comes back from the dead?

4. “What if… Spider-Man’s Clone Lived?”
(Vol. 1, No. 30, 11/81)
Hoo boy. OK, the short version: Gwen Stacy dies, biology professor Miles Warren blames Spider-Man, and he attempts revenge by cloning Spider-Man and forcing him to fight his doppelgänger in the middle of Shea Stadium. As one would. At the end of the battle, the clone dies and Spider-Man (rather callously, all things considered) disposes of the body in a smokestack. That all happened around 1975. Fast forward 20 years, when Spider-fans learn — gasp! — the clone didn’t die after all, but instead recovered from his injuries and spent years on the road coming to terms with his existence before returning to New York City. Trust me, the What If…? version of the clone’s return makes a helluva lot more sense and doesn’t ruin more than two years of Spider-Man comics while doing it. 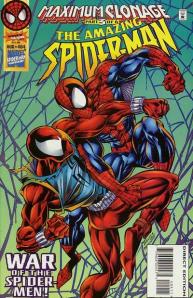 5. “What if… Elektra Had Lived?”
(Vol. 1. No. 35, 10/82)
By now, it should be clear that any What If…? issue in which we’re asked “What if… [insert character] had lived?” is almost guaranteed to be on this list. As I mentioned in a previous list, there are many ways in which comic-book characters can — and often do — come back from the dead, to the point where even the characters themselves joke about the many resurrections around them. In hindsight, it’s not surprising that Marvel later reversed the 1982 execution of Elektra at the hands of Bullseye — she was just too marketable a character to give up, no matter how much her creator, Frank Miller, may have protested the decision to bring her back to life.

6. “What if… Beast and the Thing Continued to Mutate?”
(Vol. 1, No. 37, 2/83)
The X-Men’s Beast and Fantastic Four’s Thing are two of Marvel’s original hard-luck heroes: the gruff-but-lovable Thing has always felt trapped within his rocky form since that fateful rocket ride, while Hank McCoy started out human-looking (albeit with big feet and hands) but accidentally mutated himself in the 1970s, gaining fur, fangs, and claws more befitting his nom de guerre. This two-in-one issue asked what might happen if they just kept changing (and as you can see from the cover, it ain’t a pretty sight). Wouldn’t you know it — during a short-lived period in the ’80s when Reed and Sue Richards took a break from the FF, the Thing got even craggier (he later reverted back to his classic look), while Beast later evolved into a more feline form as a result of a team member trying to save his life. Harsh, but, you know, considering the alternative…

7. “What if… Sharon Carter Had Not Died?”
(Vol. 1, No. 38, 4/83)
Yeah, what I just said about characters coming back to life? Same deal here. Quick review for the younger crowd: Sharon Carter was Captain America’s main gal back when he was first revived from his unintended deep freeze. An agent of SHIELD, she was deemed killed in action during a top-secret mission (which Cap didn’t know about, since her death had already been faked so that she could go on the top-secret mission — irony!). In fact, she was alive and spent months trapped in enemy territory before she could escape. Years later, she entered Cap’s life again and even led SHIELD for a while during Nick Fury’s absence. And then, as often happens in these on-again off-again relationships, she’s brainwashed by an evil psychiatrist and forced to assassinate Cap on the steps of a courthouse. Whoops.

8. “What if… the Amazing Spider-Man Had Not Married Mary Jane?”
(Vol. 2, No. 20, 12/90)
Peter Parker’s marriage to Mary Jane Watson was one of the bigger Spidey events of the ’80s, provoking much debate among fans who couldn’t decide if the webslinger could continue his superhero career with a wife waiting at home. By the late 2000s, the debate had been pretty much put to rest, with most fans accepting the idea that even a hard-luck hero like Parker could come home to someone who loved him (a sentiment no doubt helped by the Peter/MJ romance in the Spider-Man film trilogy). This issue of What If…? played with the notion of how Parker’s life would change without MJ at his side; in 2007, the “One More Day” storyline gave fans a chance to find out for themselves. Desperate to save Aunt May’s life, Peter and MJ makes a deal with the devilish Mephisto: their marriage in exchange for Aunt May’s life. Peter then wakes up alone in bed, with no one knowing he’s really Spider-Man (he had earlier outed himself on national TV) and his marriage to Mary Jane having never existed. While the intention was to reboot the character, the decision exposed Marvel to immense criticism, with one reviewer calling it “infuriating and downright disrespectful to anyone who has come to love Spider-Man comics over the years.” 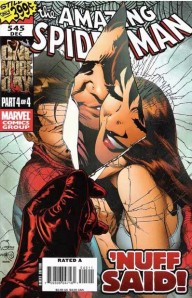 9. “What if… the Fantastic Four’s Second Child Had Lived?”
(Vol. 2, No. 30, 10/91)
In Fantastic Four #267 (6/84), Sue Richards miscarries her second child, despite her husband’s best efforts to save the baby. Not much was said about the experience until this issue of What If…? in which the child, now grown, is apparently tall enough to juggle planets (no, not really, but don’t you love that cheesy floating heads cover?). When Chris Claremont took a whack at Marvel’s first family in the late 1990s, he introduced Valeria von Doom, a young teenager who claimed to be the future child of Sue Richards and Victor von Doom. That storyline was never resolved, as Claremont moved out and Jeph Loeb took over, revealing Valeria was actually Valerie, the previously unborn child of Sue Richards. She later reverted to a fetus (just work with me here, OK?) and was born a second time, finally becoming the little sister to Franklin she was always meant to be. 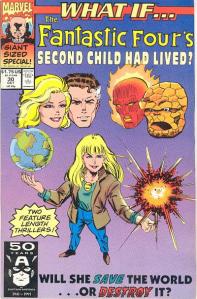 10. “What if… Magneto Took Over the USA?”
(Vol. 2, No. 47, 3/93)
This tale, starring the master of magnetism, looks at how Magneto becomes dictator of the U.S. following the deaths (though not by his hand) of Professor X, Cyclops, and Jean Grey. Without spoiling it for anyone, his reign is decisively cut short. He fares better in House of M, a 2005 storyline in which the reality of the Marvel universe is temporarily re-ordered so that mutants are the dominant force in a society where humans are second-class citizens. Technically, Magneto isn’t ruler of the U.S. in this series, but as sovereign ruler of the island-nation of Genosha, his influence on global politics is  pretty evident. So close enough.