“Hulk Not Happy They Close Sam the Record Man!”

1. Casa Loma
Toronto has gone by a few nicknames over the years — Hogtown, The Big Smoke, The City That Works — but one of the more apt ones is probably “Hollywood North.” Canada’s largest city has hosted thousands of film and television projects that take advantage of a favorable exchange rate, tax incentives, and the city’s ability to resemble any other major city (as fans of Chicago, Detroit Rock City or New York Minute might be surprised to learn). But suppose you don’t need an urban setting, but instead require a location that could serve as, say, the private-school headquarters for a band of mutant superheroes. The first X-Men movie in 2000 was practically a love letter to the Greater Toronto Area, with most scenes shot in and around the city (even the snowy battle scenes set in northern Alberta were actually shot in Rouge Park, a large urban forest in Toronto’s east end). But no location seemed more up to the task than Casa Loma, a Gothic Revival-style house in midtown Toronto that was built for a prominent financier between 1911–1914. At 98 rooms, it was the largest private residence in Canada in its day; it fell into public hands in 1933 when the original owner couldn’t afford its upkeep. In recent years, the tourist attraction’s unique architecture has made it a popular site for filming, and all interior shots of  Xavier’s school were filmed there. Heck, Casa Loma even comes with its own stable, which provided a nice backdrop for Logan and Xavier’s expository stroll. Later X-Men films would see shooting move to, um, Canada’s other Hollywood North in Vancouver, but X-fans can still walk down Casa Loma’s wood-paneled hallways and pretend it’s their first day of classes at Mutant High.

2. The Distillery District
One of the nice things about living in Toronto (or not-so-nice, depending on whether you’re stuck in traffic) is that the city always seems to be under construction. Fortunately, some older sections of the city have been spared the wrecking ball, such as the Distillery District, a 13-acre area that’s home to the largest collection of Victorian-era industrial architecture in North America. The heritage buildings that once comprised the Gooderham and Worts distillery are now home to shops, bars, restaurants and cafés for people looking for a taste of how streetscapes might have looked in the 1800s. Not surprisingly, the it-takes-little-effort-to-make-them-look-industrial-or-European buildings also have their fans among film location scouts, as evidenced by such diverse films as Tommy Boy, Short Circuit 2, Cinderella Man and The Long Kiss Goodnight. On occasion, the area has even been pressed into service as a Nazi concentration camp, such as the one where a young Magneto discovered his powers in the opening shots of the first X-Men movie. (The smokestack in the ominous camera pan that ends the scene is part of the district’s Boiler House complex.) Not the sort of image you want to contemplate while enjoying a cup of chai on one of the café patios, but interesting nonetheless.

3. Parkwood Estate
The exterior shots of Xavier’s mansion in X-Men were shot at Parkwood Estate, a palatial home in nearby Oshawa built by General Motors of Canada founder Samuel McLaughlin. His family lived there from 1917 until 1972, and it was designated a National Historic Site in 1989 for being a “rare example of the type of estate developed in Canada during the inter-war years.” The 55-room, 15,000 sq.-ft. mansion is lavishly decorated and maintained as if the McLaughlins were still living there, making its instant conversion into a “rich person’s house” a breeze for any film professional. The final scenes of Bulletproof Monk were shot on location here, as were scenes from Hollywoodland, the 2006 film that looked at the life and death of TV Superman George Reeves.

4. Sam the Record Man
Though the chain once boasted 140 stores from coast to coast, Canada’s Sam the Record Man wasn’t large enough to survive the Internet’s entry into the music retail business. Sam’s flagship store on Yonge Street was famous for its kitschy signage and collection of music memorabilia, but its most prominent contribution to the streetscape was the giant neon sign that looked like two spinning records. Sadly, the signs were taken down in 2008, a year after the store shut its doors, as part of the building’s acquisition by nearby Ryerson University. But the sign lives on in the memory of millions of Torontonians, and also in films that used that section of Yonge Street to sub for gritty New York City streets, including 2008’s The Incredible Hulk and 2010’s Kick-Ass. In Hulk’s climactic battle between the Hulk and the Abomination on the streets of “Harlem,” the discs are clearly visible alongside other Toronto landmarks like Zanzibar’s (a strip club) and The Big Slice (not a strip club). And while Kick-Ass makes it clear the action takes place in New York City, it’s hard not to notice Sam’s discs as Kick-Ass and his compatriot take a drive through “Times Square.” 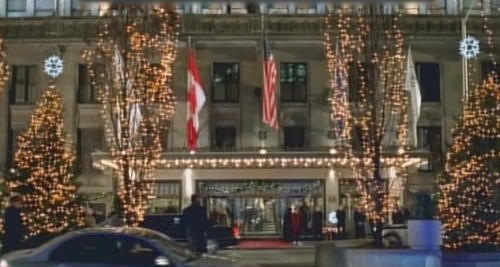 5. Fairmont Royal York Hotel
When the Queen comes to town, this is where she stays. That’s pretty much all you need to know, but if you’re curious: opened in 1929, 28 floors, 1,365 rooms, tallest building in the British Commonwealth until the completion of nearby Commerce Court the following year. The hotel’s opulent interiors and spacious common areas have shown up in a few films, including RED, the comic-based 2010 film about a CIA black ops team brought out of retirement. Though one scene involving a dinner in honor of the U.S. vice-president is set in Chicago, it was actually shot at the Royal York, where the grandeur of its ballroom, lobby and main entrance are all on fine display as Bruce Willis and company go about their mission.

6. Old City Hall
With its clamshell centre and curved twin towers, Toronto’s City Hall is one of the city’s most distinctive buildings, but just a stone’s throw away from it sits Old City Hall, which served at the city’s seat of government from 1899 to 1966. These days, the building is leased by the province and used as a courthouse, but every so often its Romanesque Revival features (square towers, ornate carvings, big round arches, heavy stonework) makes it a handy backdrop for anyone needing an instant museum or similar-looking “official” building. 2003’s Bulletproof Monk, based on the underground comic of the same name, made use of several Toronto locations, including a barely disguised subway platform meant to stand in for New York’s more familiar system, but Old City Hall plays a big role as the museum where the movie’s plot gets rolling. (See, there’s this ancient scroll that grants ultimate power to whoever has it and… you know what, if you haven’t seen it by now you probably never will, so never mind.) 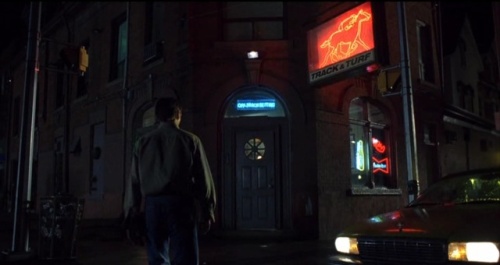 7. Stoopy’s Tavern
Stoopy’s might not be on every Toronto tourist’s to-do list and it’s not located in the more tourist-friendly part of town, but that doesn’t make it any less of a landmark. Named after a former player with the Canadian Football League, the bar is a tribute to all things football, with paraphernalia and photos offering glimpses into Canada’s football past (and yes, we do have one). The bar’s interior has popped up in movies like Cocktail and The Ref whenever a generic “dive bar” is needed. Much of 2005’s A History of Violence was filmed in rural communities surrounding Toronto (no surprise, since much of the film is set in rural Indiana), but when Viggo Mortensen’s character drives into what is supposed to be a seedier section of Philadelphia, he ends up at Stoopy’s before moving on to his final confrontation with William Hurt’s character. And while it’s safe to assume a certain amount of move magic is needed to make the place look rougher than it actually is, you have to wonder how the people at Stoopy’s feel about Hollywood types always dropping by and thinking “dive bar.”

8. CN Tower
And then there is the rarest of film projects: a movie shot in Toronto that is actually set in Toronto. Based on the graphic novels by Bryan Lee O’Malley, Scott Pilgrim vs. the World follows the adventures of a 20something musician living in Toronto and finding the girl of his dreams, only to realize he must defeat her seven evil exes before he can win her. Director Edgar Wright stayed as close to the source material as humanly possible, which meant shooting in Toronto and giving local filmgoers the rare opportunity to see their city play itself. Casa Loma looms large in one scene where Michael Cera and Mary Elizabeth Winstead encounter a film shoot (meta-commentary!) while on a date;  Lee’s Palace, a local venue for live music, plays a prominent role in the film as well. But for sheer hometown pride, it’s hard to top the movie’s final image, in which the CN Tower — the tallest freestanding structure in the world, or at least it used to be — appears in the skyline. Other films shot on the cheap have used images of Toronto’s downtown skyline to represent other cities, being careful not to pan over to Toronto’s most recognizable landmark. But not here. Thanks, Scott.