Making the Grade: Ways to Take Over the World

Military might
“And then I shall ruuuuuuuuule the world!” Taking over the planet or a good chunk of it: it’s a common goal shared by the more ambitious and/or insecure super-villains out there. Of course, what they’ll actually do once they accomplish that task is rarely, if ever, brought up at the planning sessions, but I guess some people are more “life is a journey” types. Of all the ways in which one could conquer the world, military force is often the first that comes to mind for obvious reasons: it’s been tried many times before; it has the visual oomph that shows you mean business; and it’s easier to get some people to support your cause if you give them the hardware to eliminate some of their more bothersome neighbors. However, all global-scale military actions will fail for one reason and one reason only: Switzerland. Don’t let the funny shorts and hilltop yodeling fool you; there’s a good reason why the pope doesn’t surround himself with members of, say, the Swedish Guard. Take it from me, learn from history and skip the guns and tanks in your next bid for global domination. You’ll be the richer, and less stressed, for it. C-

Doomsday weapon
So if conventional weaponry is off the table, why not try an unconventional one? Nuclear warheads are the obvious choice, but would-be world-beaters have come up with all kinds of creative ways to scare the unwashed masses into acceding to their insane demands. All it takes is one weapon capable of taking out a huge chunk of real estate, a populace willing to believe you possess it and that you’re crazy enough to use it, a small army to keep the good guys away from it, and someone you can trust to guard the button while you go get snacks, or whatever. Terriers come in handy for these kinds of situations. And who knows? Maybe after a few years of your rule, the cowed masses will decide your way of doing things beats the whole “democracy” thing. Sure. Could happen. C

Economic stranglehold
Another big drawback to the military or deterrent options is, of course, money — mercenaries aren’t cheap, and good luck finding anyone listing grenade launchers or ICBMs on Craigslist. So even before you start planning your diabolical rise to power, you’ve got to figure out how to pay for your military campaign. Which then invites the obvious question: if you can figure out how to get your hands on oodles of cash, then why bother spending it on matching uniforms and death rays when you can, like, just buy a few senators and let them deal with the rubes? No one plots to rule the world because they’re eager to regulate the beet market in upper Moldova — for most of us, it’s all about the Benjamins, baby. Or Bordens, if you’re Canadian. A- 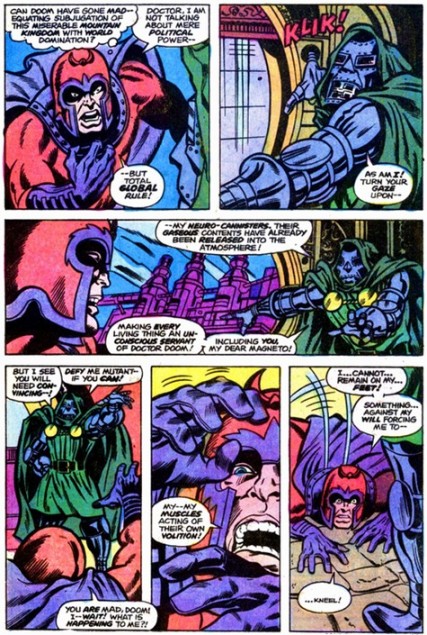 Chemical control
But maybe you’re not into world conquest for the money, and relying on conventional warfare is just too pedestrian for someone with your dramatic flair. You can always do what Doctor Doom did: pump the atmosphere full of chemicals that saps free will and bends every human being to your will. He’s done this at least twice: once in the ’70s, when he used a gas to surreptitiously take over the world (then grew bored with absolute power and freed Magneto from his control for some old-fashioned slugfestin’), then again in the 1987 Emperor Doom graphic novel, when he harnessed the super-persuasive power of Kilgrave the Purple Man to conquer the world without firing a single death ray. And AGAIN, Doom grew so bored after finishing his to-do list he relinquished his rule to go back to getting foot-stomped by the Thing. To each their own. Two questions: (1) Did Marvel’s writers think the whole “be careful what you wish for” theme wasn’t obvious enough the first time around? (2) The guy’s name is Kilgrave and he thought “the Purple Man” was a more badass choice? Huh. B-

Religious crusade
Definitely the preferred route for the charismatically inclined, waging a holy war against the infidels is a time-honored way to take over the world, if only because promising eternal delights in heaven is cheaper than providing health and dental to your minions in the here and now. The problem is there are so many damn details to work out first. Monotheism or polytheism? Stark raving mad OT God or hippie-loving, New Testament type? How many miracles do you need to fake? How long should your holy book be? When are your holy days? What color robes should the high priestesses wear? Should you make the high priestesses clothing-optional? Should you schedule the apocalypse to happen before or after the Survivor season finale? On the matter of heretics: nailed to crosses for that retro vibe or a more modern form of torture, perhaps something involving a time-share with the Palin clan? Should you buy your mass-suicide sneakers in bulk at Payless or try to swing an endorsement deal with Reebok? By the time you figure it all out and round up enough disciples to do your bidding, you’re pretty much planning your grandchildren’s rise to power, and when’s the last time those ungrateful brats did anything for you? C-

Environmental devastation
The theory here is seven billion people can be too much for anyone, even a total stud like yourself, to manage effectively, plus the planet right now is in a bit of a fixer-upper state thanks to our collective addiction to SUVs, plastic bags, hair products and the like. So a little planetary housecleaning is in order before you step up to lead the humans that survived the exercise — which is only fair, since you’re the one who turned them into survivors in the first place. Batman’s arch-nemesis, R’as al-Ghul, is the poster child for this method, coming up with all kinds of whacky schemes involving volcanoes or melting ice caps just so he can whittle the Earth’s population to a more manageable, non-polluting number. And, you know, kudos to him for really paying attention during Woodsy the Owl’s PSA ads, but you don’t need to sit through Waterworld to know a reality where watching Kevin Costner drink his own pee is hardly one that anyone should aspire to. Plus, if chaos theory has taught us anything, all it takes is one damn butterfly in Sumatra to flutter the wrong way and your perfect plan to blot out the sun goes all ker-flooey. Recommended for advanced world conquerors only — or those who don’t care much about the state of whatever’s left to rule. D

This entry was posted in Making the Grade! and tagged global domination, taking over the world, world domination. Bookmark the permalink.

2 responses to “Making the Grade: Ways to Take Over the World”