“Where Does He Get Those Wonderful Lines?” 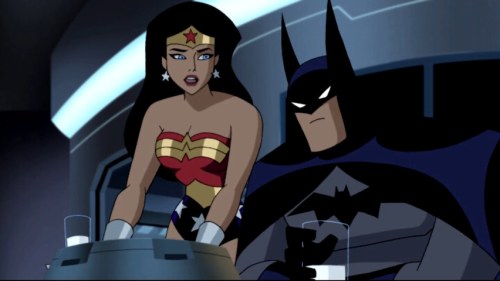 [The League is in the watchtower for the first time.]
Superman: Incredible… Do your stockholders know about this Bruce?
Batman: A line item hidden in the aerospace R&D budget.

Batman: I’ll take it from here. [takes Deadshot away from the group]
Deadshot: You can’t scare me, Batman.
Batman: [grabbing him] Let me give you one word of advice…
[Batman whispers something indistinct.]
Deadshot: Okay, I’ll tell, I’ll tell.
Wonder Woman: [to Superman] What did he say?
Superman: You don’t want to know.

Cheetah: How do you know so much about me?
Batman: Let’s just say, cats aren’t the only creatures who are curious.
Cheetah: Too much curiosity can be dangerous.
Batman: Maybe I like danger.
Cheetah: Do you?
Batman: [whispers] Try me.

Superman: Batman! It’s really you! [hugs him]
Batman: … Am I missing something?
Superman: Sorry, it’s just that… well, it’s a long story.

Superman: You don’t know Darkseid like I do.
Batman: We know he used you, humiliated you, brainwashed you, wound you up like a tin soldier and turned you loose against Earth. Cry me a river. On the outside chance that this isn’t one of his schemes, we have to take action. So I suggest you get over it.

Amazo: [scanning Batman] You don’t have any powers.
Batman: I have this [pulls out piece of kryptonite]. It’s a package deal. You get our powers, but you get our weaknesses, too.
[Amazo jumps off the building into the sewer.]
Hawkgirl: You always carry a piece of kryptonite with you?
Batman: Call it insurance.
Hawkgirl: And they say I’m scary.

Doctor Destiny: Coming here was the mistake of your life. See, the closer I am to someone, the stronger I get. I’ll be able to go in your brain, even if you’re wide awake.
Batman: My brain’s not a nice place to be.

Batman: Who are you working for?
Gunman: [in Kaznian language] You can’t understand a word I’m saying and I wouldn’t tell you anything if you could.
Batman: [in Kaznian] I can… [advances on him menacingly]… and you will!

Lord Hawkgirl: You’re sure you don’t want to help us out?
Lord Batman: Too much to do.
Lord Green Lantern: C’mon, for old time’s sake.
Lord Batman: I hate old times.

[Luthor prepares a large gun]
Hawkgirl: What is that?
Batman: [whips out Batarang] Breakable, I hope.

Lord Batman: Think about it: a world where there’s no crime. No victims. No pain.
Batman: And no choice! Who elected you, anyway?
Lord Batman: Who elected you? The problem with democracy is, it doesn’t keep you very safe.
Batman: It has other virtues. But you seem to have forgotten that.
Lord Batman: I didn’t forget! I just chose peace and security instead.
Batman: You grabbed power!
Lord Batman: And with that power, we’ve made a world where no eight-year-old boy will ever lose his parents because of some punk with a gun!
Batman: [pauses, then drops his Batarang] You win.

Flash: [standing over “unconscious” Sinestro] Looks like I didn’t need you after all, yo. But you can help me tie him up.
Batman: Catch. [shoots Flash in the chest with a grapple] The real Flash would’ve been too fast for that. [shocks him, revealing Clayface]
Clayface: What gave me away?
Batman: You overplayed your part, “yo.”

Martian Manhunter: You were greatly missed, my friend… by all of us.
[All eyes turn to Batman, who is standing apart with arms crossed, emotionless]
Wonder Woman: Don’t let him fool you. Your death hit him as hard as it did any of us.
Superman: Really?
Batman: No. I never believed you were dead in the first place.

[To avoid the invading Thanagarians, the League are removing their costumes and disguise themselves as civilians.]
Flash: Hold on a second here. What about the whole secret identity thing? I mean, I trust you guys, but I’m not sure I’m ready to…
Batman: [points at Flash] Wally West, [points at Superman] Clark Kent… [removes own mask] …Bruce Wayne.
Flash: [stares, wide-eyed] Showoff.

[Batman throws Batarangs at oncoming Thanagarians. At first nothing happens.]
Thanagarian soldier: Your weapons are pitiful!
Batman: Wait for it…
[Swarm of bats attack the Thanagarians]

Green Arrow: C’mon, I don’t belong up here, fighting monsters and aliens and super-villians. I just help the little guy. And a big club like this, you tend to forget all about him. So gee whiz, I’m flattered to be asked and all. But no thanks.
Batman: Suit yourself… [starts to walk away, then turns back] Those monsters you don’t fight? They tend to step on little guys. 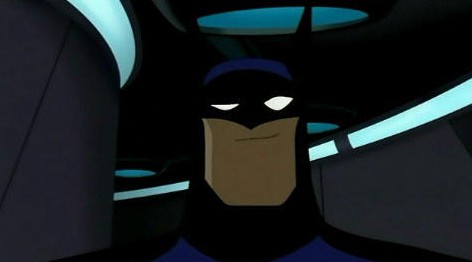 Batman: What’d you get him?
Wonder Woman: I’m not saying anything [whispering] He’ll hear and spoil the surprise.
Batman: He can hear that, too.
Wonder Woman: How about you?
Batman: He’s not the easiest person in the world to buy birthday presents for [holds up an envelope].
Wonder Woman: Bruce! You didn’t get him a gift certificate?
Batman: [offended] No! …Cash.

– For the Man Who Has Everything

[Superman, Batman, Wonder Woman, and Green Lantern have been turned into children.]
Batman: This better be temporary.
Superman: You sound weird, Whoa. So do I!
Wonder Woman: [grinning at being the tallest] I kind of like this.
Batman: [to Green Lantern] What’s the matter?
Green Lantern: I wore glasses as a kid. Guess I need them again. [large, square, green glasses appear on his nose] Wow! I didn’t even try to make these!
[Superman cracks up]
Batman: I hope not.
[Green Lantern strains and morphs the glasses into a mask]
Superman: Cool!
Wonder Woman: [smacks him] Will you stop messing around? We gotta find Mordred!
Batman: Bet the little punk’s in there! [runs towards the castle. Green Lantern, Superman, and Wonder Woman all quickly overtake him by flying] It’s not a race!

Kid Wonder Woman: Etrigan! You stop right there. I mean it! You naughty monster. Bad, bad Etrigan! [Etrigan starts to cry. Wonder Woman picks him up] Hey little guy, it’s okay, I won’t hurt you.
Kid Batman: You’ve got to be kidding.
Kid Wonder Woman: He’s just a baby. [burps Etrigan] That’s all he needed.
Kid Green Lantern: [sniffs] Aww man, that ain’t all he needs.
Kid Batman: Now that is a job for Superman.

Wonder Woman: Circumstances asides, it was kind of… enjoyable being a kid again.
Batman: I haven’t been a kid since I was eight years old.

Wonder Woman: Don’t you ever wish you were down there?
Batman: I’m down there all I need to be.
Wonder Woman: Yes, but it’s just a job to you. I’m talking about going down there and having some fun. Maybe… maybe with someone special.
[Batman frowns and looks away]
Wonder Woman: No. No dating for the Batman. It might cut into your brooding time.
Batman: One: dating within the team always leads to disaster. Two: you’re a princess from a society of immortal warriors; I’m a rich kid with issues… lots of issues. And three: if my enemies knew I had someone special, they wouldn’t rest until they’d gotten to me, through her.
Wonder Woman: [crushes a stone gargoyle head with her hand] Next?

Amanda Waller: You need to step back.
Batman: Not gonna happen. Long Shadow’s with us.
Amanda Waller: [to troops] Safeties.
[Soldiers train guns on the League; Superman and Aquaman get between them and Long Shadow]
Batman: [smirking] Mine are bigger than yours.

[Batman is in free fall, having bailed out of his plane]
Batman: Batman to all points. I could use some air support. Since I can’t fly. At all. [continues to fall and states calmly] Now would be good.

Green Lantern: Diana’s carrying a grudge.
Batman: She’ll get over it. How about you? Carrying anything?
Green Lantern: What? Shayera? We’re cool. We’re giving each other our space. I’m seeing Vixen, now. [pause] I’m very happy.
Batman: Uh-huh.
Green Lantern: Anyway, why are we always talking about my love life? What’s going on between you and Diana?
Batman: Nothing. She’s a respected colleague.
Green Lantern: Uh-huh.
Batman: I don’t have time to pursue a relationship. My work is too important to allow other distractions. Diana is a remarkable woman, she’s a valued friend. She’s… standing right behind me, isn’t she?

Old Bruce Wayne: [met by his past self] Surprised to see me?
Batman: A little. I’m more surprised that I lived so long.
Terry McGinnis: Batman, Bruce Wayne. Bruce Wayne, Batman. Or have you met?
Bruce and Batman: [simultaneously] Not now!
Terry: Great. What did they used to call it? Stereo?

[The League confronts one of the Jokerz.]
Terry McGinnis: You’ve got some information we need, Ghoul.
Ghoul: You won’t find me the talkative sort. [Batman grabs him] Hey!
Batman: [drags Ghoul over to the edge of the building and dangles him over the edge by his leg] Where’s Chronos? My arm’s getting tired…
Old Bruce Wayne: I can’t believe I was ever that green. [Grabs Ghoul and throws him across the rooftop] This is how you interrogate someone!
Ghoul: …and we’ve got 9,453 active Jokerz organized into about 200 smaller groups. I don’t know where Chronos is! He contacts us! He spends every night in a different one of those old buildings! There’s no way of knowing ahead of time where he’s gonna be! And that’s everything I know!
Old Bruce Wayne: Everything?
Ghoul: I wet my bed until I was fourteen!
Old Bruce Wayne: Losing… my… patience…
Batman: [pulls Bruce Wayne back with a hand on his shoulder] I can’t control my friend here much longer. You’d better give us something we can use.
Static: [on the sidelines, quietly] Wow. Batman playing good cop…. [shakes his head in astonishment]
Green Lantern: Everything’s relative.

Green Lantern: The Green Lanterns have a legend. No one can see the beginning of time. It’s a universal law!
Batman: Write him a ticket!

– The Once and Future Thing

Superman: Why are all of you defending Captain Marvel?
Batman: We like him. He’s… sunny.

Shayera: How stupid do you think I am?
Batman: Scale of one to ten?

– Shadow of the Hawk

Atomic Skull: Wait a minute – we help you guys save the world, and we don’t even get any consideration?
[Batman looks at Superman, who shrugs]
Batman: You’re right. Five-minute head start.
Atomic Skull: Five minutes? Are you kidding?
Wonder Woman: Four minutes, fifty seconds.
[The villains promptly flee]
Superman: [to Batman] A head start? You’re getting soft in your old age.
Batman: Don’t you have a tall building to go leap?
Wonder Woman: And the adventure continues…