8 Instances in Which Hawkeye Quits Being an Avenger

One of my favourite lines in Avengers: Age of Ultron is in that scene where Hawkeye is giving the Scarlet Witch a pep talk during an attack: “The city is flying, and we’re fighting an army of robots. And I have a bow and arrow. Nothing makes sense.”

And he’s right; when you get right down to it, a guy who’s a whiz with a bow and arrow — even fancy explosive and acid-tipped arrows — seems out of place on a team with a walking tank, a super-soldier and an actual god.

But at least Movie Hawkeye gets a few badass moments to shine; Comic-Book Hawkeye is often cast as The One Who Throws Hissyfits, or the guy more likely to quit the team in a huff than look cool while flying the Quinjet. 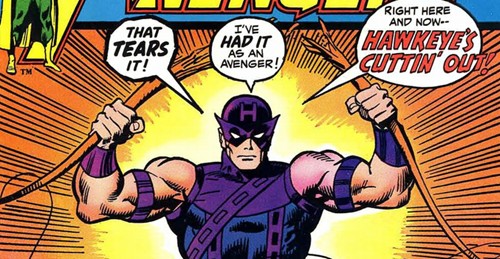 1. “Cross my name off the roster, people — ’cause Hawkeye’s goin’ it alone!”
The Avengers has always been a team with members quitting and joining all the time; heck, the Hulk’s charter membership didn’t even last two issues. Hawkeye was among a group of reformed former bad guys who joined the team in Avengers #16, and right from the start he was the designated hothead of the group. But readers figured out pretty early his bravado and bluster covered up some deep insecurities, which came to a head in 1973’s Avengers #109. Long story short: Hawkeye is bummed because the girl he’s got a crush on is dating someone else, and this somehow leads to him taking a job offer and getting lured into a trap set by a bad guy who demonstrates his badness by strapping Hawkeye to a bomb. The Avengers arrive in time to save him because, hey, that’s their job. In gratitude, he quits the team because he’s tired of being “the stupid Avenger.” Yeah, that’ll… show them? I guess?

2. “I’m leaving the Avengers again!”
Shortly after that first resignation, Hawkeye got over whatever it was that made him want to quit and returns to the Avengers, who frankly were a little more accommodating than I might have been if he had shown up on my doorstep. Anyway, he joins them on fun adventures like a quick trip to the 19th century to foil the eeeeee-vil plans of Kang the Conqueror. While there, he meets the Two-Gun Kid, a Western vigilante with the awesome super-power of possessing two whole six-shooters, and a bromance is born. After the bad guys are dealt with and it’s time to head back to the present, the Two-Gun Kid asks in Avengers #144 if he can go with them to the 20th century; the minute they get back, he and Hawkeye set out to become the American West’s newest vigilantes, putting their “cowboy and quasi-Indian” skills to work protecting… um, cattle, rattlesnakes, tumbleweeds. You know, Western stuff. 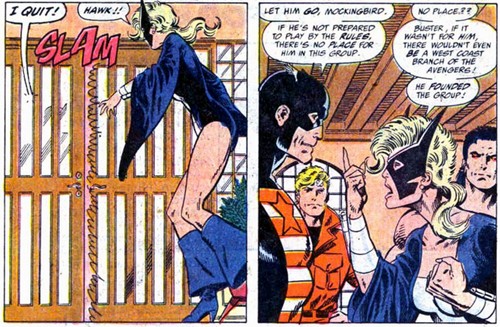 3. “There’s something I can do right now! I QUIT!”
Once again, Hawkeye made his way back to the Avengers, just in time to head up a West Coast expansion of the franchise. Things were quiet for a while — must have been all that sunshine and L.A. attitude keeping the guy mellow — until 1990, when the U.S. government forces the team to accept USAgent, an extremely cut-rate Captain America, into its ranks. This doesn’t sit well with Hawkeye, who picks a fight and then takes a powder. To be fair, it probably wasn’t so much USAgent’s arrival that got Hawkeye steamed up as it was the fact his marriage with Mockingbird was on the rocks, on account of how Mockingbird had just recently let a guy who kidnapped, drugged and brainwashed her into thinking she was his 19th-century bride die by letting him fall from a cliff. Yeeeeeah… not really sure Hawkeye had a right to judge there.

4. “You probably took all the credit for training them, too — after you dumped us for the West Coast crowd!”
That lover’s spat didn’t last long, though, as Mockingbird soon went after him and they reconciled their differences. This was also around the time Hawkeye and Mockingbird hooked up with the Great Lakes Avengers (think of a team of heroes created to be spoofs of superheroes for an Saturday Night Live skit) and decided all the team needed was a little bit of training. So we got a few issues of West Coast Avengers where the action would cut away from the main team and we’d check in on whatever paces Hawkeye and Mockingbird were running the GLA through. Didn’t last long, though — Hawkeye high-tailed back to the “real” Avengers team as soon as he could, leaving his ex-wife with the team no one took seriously. 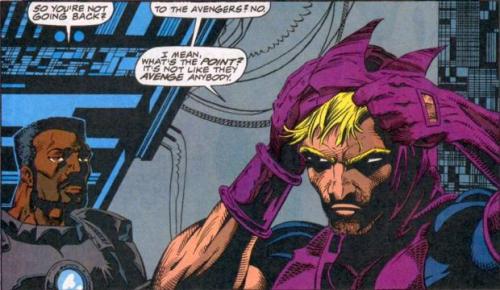 5. “What’s the point? It’s not like they avenge anybody.”
The next time Hawkeye quits the team is complicated because they don’t show him turning in his membership card or stomping off. There was also a bit of confusion for a time about whether he was on the team or not. It starts in Avengers West Coast #100, which features the death of Mockingbird and Hawkeye standing at her grave (don’t worry, she got better). The next issue was part of a crossover and Hawkeye shows no sign of grief; the series was then cancelled with #102, with Hawkeye nowhere to be found among the disbanded members. Later stories in other titles made it clear Hawkeye left the Avengers at some point shortly after Mockingbird’s death — presumably because he needed some personal time to work through his grief — and he rejoined the team just in time to get sucked into the massive clusterfudge that was 1996’s Onslaught crossover and Rob Liefeld’s laughably awful post-Onslaught take on the Avengers. Tough break, Clint. 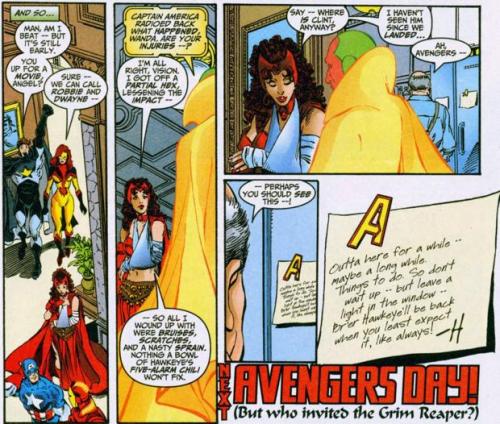 6. “Hawkeye’ll be back when you least expect it, like always!”

“Say, where is Hawkeye, gang?”

“He left a note on the fridge. Something about taking off for a while.”

“Oh, I didn’t realize it was Thursday already. Boy, this week just flew by, didn’t it?”

Frankly, at this point I’m not so much interested in what Hawkeye was up to as I am in where the Avengers got the Avengers logo fridge magnet, and whether they get discounts on their officially licensed merchandise.

7. “You don’t have to worry about ol’ Hawkeye screwing up anymore. I’m outta here!”
Yes, I watched Avengers: United They Stand. Don’t judge me. Though the 1999 Fox animated series only lasted 13 episodes and generated a lot criticism for… let’s call them questionable wardrobe choices, it managed to score a few firsts, like being the first time that Avengers Falcon, Tigra and Wonder Man appeared outside the comics. The fourth episode, “Comes a Swordsman,” was also the first time Hawkeye quit outside the comics. When a series of robberies at biological labs around the country points to someone at a travelling carnival pulling off the heists, suspicion immediately lands on Hawkeye since it’s the same carnival at which he used to work. Angered by his team not trusting him, Hawkeye storms out and returns to his carny roots. I won’t spoil the ending for anyone, but you can probably guess from the episode title who he meets when he gets there. Say, does anyone else get the feeling Angry Government Guy up top is getting kinda touchy-feely while he’s chewing out Hawkeye? Personal space, dude.

8. “I quit.”
The most recent example of Hawkeye quitting the Avengers that I can find took place in the pages of Secret Avengers, a team of black-ops superheroes working behind the scenes. He joined the team in 2012; the book’s second volume (2013) starts out with S.H.I.E.L.D. director Maria Hill recruiting Hawkeye, Black Widow, Nick Fury, and Phil Coulson to foil a terrorist attack involving teleportation technology. After a few more adventures with the team, Hawkeye quits in Secret Avengers #16 when a mission goes south — though in fairness to him he wasn’t the only team member to up and quit over being kept in the dark about what was really going on. So I guess the only thing left to do now is wait for him to change his mind and rejoin the team… wait, he’s already back in? Never mind.