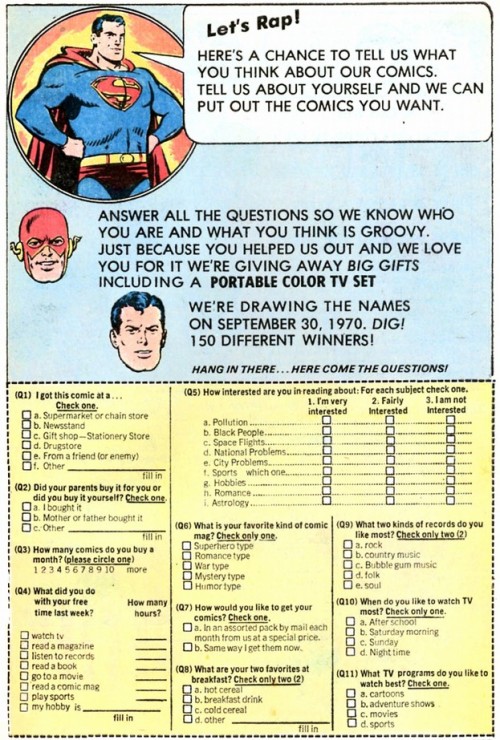 HEY KIDS! Let’s “rap” about the things you find “groovy” — you just might win your very own PORTABLE COLOR TV SET! Whoo!

Come on, you crazy cats, this is your chance to DO YOUR THING! (Assuming your thing is telling total strangers which breakfast items you eat and which kinds of sports equipment you own in the hopes of scoring a transistor radio.)

This two-page ad appeared in DC titles cover-dated October 1970, and let’s give the editors credit for trying to understand their readers a little better. Even so, I’ve got a few questions and thoughts of my own.

1. If I could go back in time, I would first stop off in 1938 with a big stack of dimes, and then go to the 1970s to find out which reader-suggested characters and titles from this survey made it into future comic titles. It would certainly clear up a few questions I have about that decade.

2. Can you imagine Batman in any context saying “Do your thing”…? Oh, Batman, you hepcat, you.

3.“DIG!” Um, okay. But dig what, exactly? I mean, I guess they mean it in the “can you dig it?” sense, but even then the word feels like it was randomly dropped in there, almost as if this was written by 50-plus executives trying to write the way they think teenagers talked. Were the hip folks back then prone to yelling “Dig!” in random places like that?

4. Hmmm, an Al Plastino drawing of Superman from the 1950s illustrating a survey designed to figure out DC’s editorial direction for the 1970s. I think I see one quick fix here.

5. “How interested are you in reading about a) Pollution b) Black People c) Space Flights d) National Prob— wait a second here. “Black People”…? Imagine a racist comic reader coming across this survey. “Hold, you mean I have the option not to read about black people in my comics? Cool!” Different times, man.

6. Under types of records I like the most, I get to choose between rock, country, soul, folk and “Bubble gum music.” Which I’m guessing doesn’t mean the jingle from the Juicy Fruit ads.

7. Also: when will the polka fans of the world finally get some respect?

8. “This drawing is void in those states where prohibited by law.” Well, which states are those? Because I’m guessing most of the readers filling out this survey aren’t up on the intricacies of their home state’s rules regarding comic-book contests.

9. “Have comics ever helped you in school?” That feels like it should be more than a simple yes/no question, don’t you think? I mean, helped how, exactly? Provided reference material for a last-minute book report? Helped someone ace a pop quiz on  the elements? Kept a desk with uneven legs from wobbling?

10. “How much spending money do you have each week?” Where do you keep it in your house? Which windows do your parents tend to keep unlocked at night? Do you own a dog, and if so what is his or her preferred dog treat?

11. “Comics have helped me in: check one a) English and spelling b) reading c) science d) history or current events.” Wait, why are those the only options here? Part of me wants to write in “Math” or “Folk Dance” just to see what happens.

12. “What kind of sports equipment do you own?” I’m trying really hard to think of a situation in which that question would be asked of a comic fan in 2017. I mean, I’m not saying it’s impossible for someone to be into comics and into playing sports, just… how would the question even come up? “Say, I noticed you picked up the latest issue of Deadshot. Tell me, do you also own snowshoes or a croquet mallet?”

14. The way Sgt. Rock is looking at us, he looks like a head you see in one of those “Draw Me!” ads for art school.

15. “Hang in there… Here come the questions!” Uh, yeah. We know. We can see them right there on the bottom half of the page. Not sure why you thought we needed a reminder to be patient, but hey, you do you, Daddy-O.

16. “I got this comic at a… a) Supermarket or Chain Store b) Newsstand c) Gift Shop – Stationery Store d) Drug Store e) From a friend (or enemy) f) Other___” I have a sneaking suspicion most readers today would have to choose (f) for this one.

17. Wait a second, “from a friend (or enemy)”…??? I’m guessing this was someone’s idea of being cheeky, but now all I can think of is someone handing their mortal enemy a copy of Superman’s Pal Jimmy Olsen instead of giving them the kiss of death.

18. I’m trying to imagine the ways in which this survey could have gone horribly wrong. For instance, what if a really motivated group of astrology buffs organized a campaign to send back thousands of surveys that said “very interested” next to the “Astrology” option? Would DC consider those surveys as valid? Would readers see Superman consulting his horoscope before beating up Brainiac? Would Jeane Dixon make a special guest appearance in Binky and his Buddies?

19.  “What are your two favorites at breakfast? check only two (2) a) hot cereal b) breakfast drink c) cold cereal d) other___” Do tequila shots count as breakfast drinks before 10 a.m.? Asking for a friend.

20. “This is a PRIVATE CENSUS.” Why do you suppose DC felt the need to emphasize that? Were comic fans back then suspicious of DC being a front for a shadowy government agency? Did they need a personal reassurance that Tricky Dick wasn’t sussing out the music and breakfast food preferences of America’s youth to further his own devious schemes?

21. “I think the best name for a new comic book character is… (fill in)” First, it says something about how the survey writers felt about they audience that they felt it was necessary to tell them what a blank line in a survey is for. Second, I want to salute the brave office workers at DC who had to go through all these surveys and note which character names came up the most often in the survey results. Having dreamed up quite a few characters in my younger years myself (all of them lame), I can only imagine how rewarding that task must have felt.