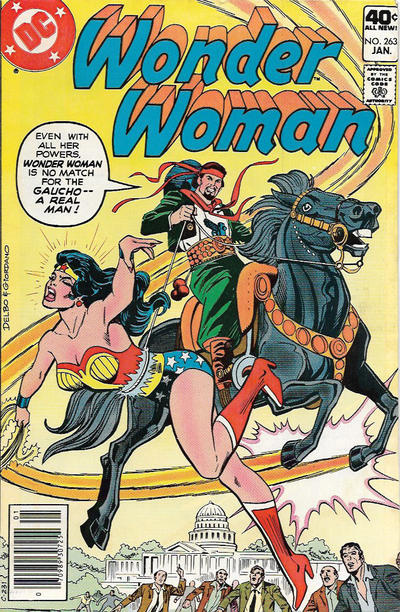 “The Power and the Pampas”

Synopsis: In this issue, Wonder Woman faces her greatest enemy yet: government bureaucracy. Oh, and also some goober on a flying robot horse. While visiting the National Archives at Washington, DC, to find out what kind of information the federal government has on her, the Amazing Amazon also finds herself dealing with the Gaucho, another of the Prime Planner’s operatives who is in town to assassinate a U.S. senator. It’s lariat against lariat in the skies above the Capitol as we end with a “to be continued” cliffhanger. 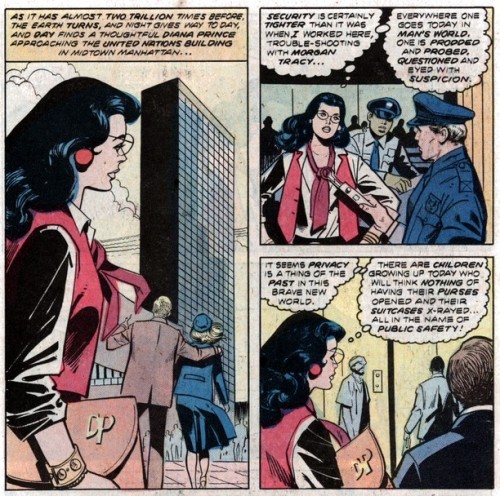 Prime Cut Panels: “It seems privacy is a thing of the past in this brave new world.” Diana, you don’t know the half of it.

Just in case anyone was wondering if this obsession with security thing was a strictly post-9/11 phenomenon. 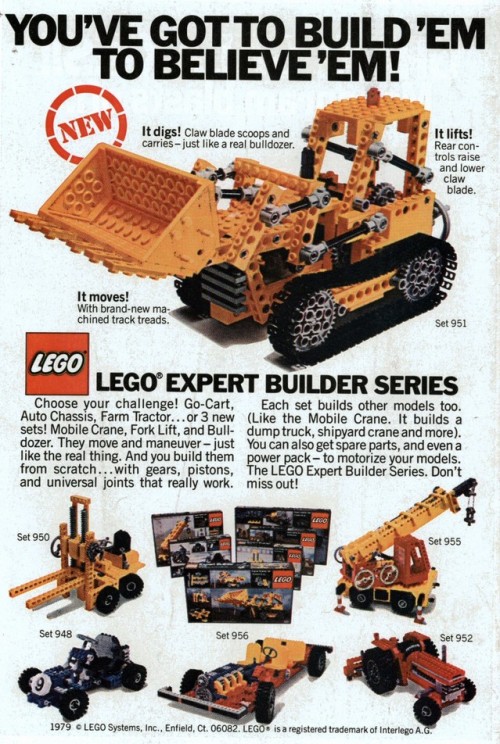 Great Moments in Advertising: Lego! The scourge of every parent with sensitive feet! Hard as it may be to believe today, but Lego toys didn’t arrive in the U.S. until 1972, when Lego USA was established in Enfield, CT. And those lucky Gen X kids who got their hands on the first building sets wouldn’t see the classic Lego mini-figures until 1978, when Lego Castle and Lego Space sets came out with tiny knights and astronauts.

The Lego Expert Builder series was geared towards older Lego fans and typically (as seen here) involved building vehicles with specialized parts like gears and pistons that allowed them to move and operate like actual vehicles. Pretty cool stuff, but I think we can all agree there’s a reason why none of those Lego movies featured Emmett on a “farm tractor.” 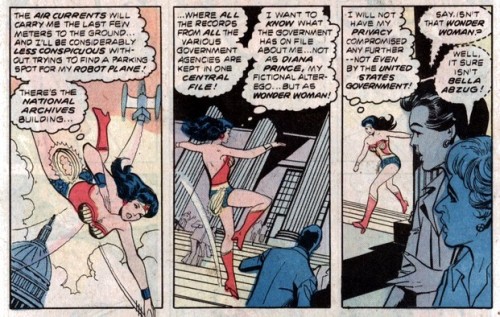 That’s Why They Called It the (Almost) ’80s Dept.: Given Wonder Woman’s civilian job with the United Nations and frequent jaunts to the American capital, it’s no wonder the book’s creators often put in references to contemporary political issues and leaders. Bella Abzug (1920-1998) was a lawyer, women’s activist and member of the U.S. Congress from 1971 to 1977.

In the last decade of her life, Abzug co-founded the Women’s Environment and Development Organization (WEDO), which was (in their own words) “a global women’s advocacy organization working towards a just world that promotes and protects human rights, gender equality, and the integrity of the environment.” Sounds like the kind of mission statement that Wonder Woman would approve.

Random Thoughts: This issue, like all the other DC books cover-dated January 1980, hit newsstands and comic shops in late October 1979 — about a month after the final episode of Lynda Carter’s Wonder Woman series aired on television. And you feel the influence of the TV show on the Wonder Woman comics published around this time, with stories similar to the mad science/espionage plots of the show.

This story, in which we see a mysterious “Prime Planner” hidden from full view, is part of a larger storyline in which Wonder Woman runs afoul of your typical comic-book secret organization. The beginning of the story shows the aftermath of her big battle in the previous issue, and the final page ends of a cliffhanger with Wonder Woman all tied up and the Gaucho chauvinistically gloating about how his predecessor “let himself be defeated by you… a mere woman, a simple senorita!” So, yeah… charming.

Oh, and there’s also a job interview! Those are exciting, right? Diana meets with a UN muckety-muck about a new international relief program to help victims of drought, famine, all the fun stuff. That’s when the head of UN security barges into her office (like, boundaries, dude) and starts spouting about how Diana is a security risk, her whole background file is a fraud, and so forth.

This idea of Wonder Woman’s secret identity being exposed by aggressive security procedures ties in neatly with the concerns she had earlier in the issue about how an increased focus on security make it harder to have a sense of privacy in our modern world — and if the book had stayed on that story crumb trail, I think it would have been really interesting to see how an Amazon from Themyscira deals with increased scrutiny in “Man’s World.”

As it is, though, that gets shunted to the side for an aerial battle over Washington between Wonder Woman and a guy on a flying horse. I mentioned this guy back when I did a list of Wonder Woman’s more embarrassing foes, and I can’t say my opinion has changed since then. Obviously designed as a throwaway sparring partner for our Avenging Amazon, he’s frankly taking up too much space in what could otherwise be an interesting tale where that Ben Franklin quote about liberty and security comes into play.