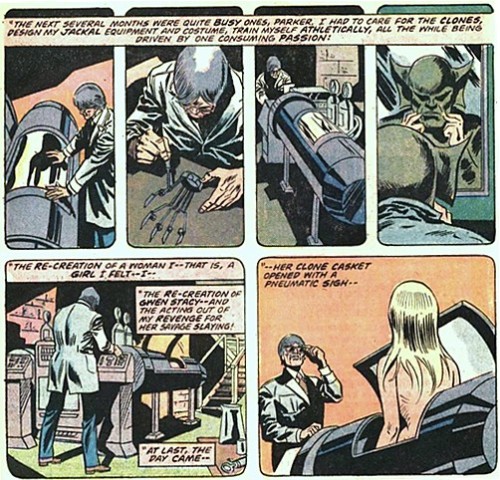 All university science professors can readily create human clones, deadly weaponry, mutagenic chemicals, etc., using nothing more than the materials in their school labs… which are never visited by security guards, students or anyone else who might show up to ask why, for example, the professor might be helping a dripping, naked young woman out of a metal tube after hours.

Every rampage by a professor-turned-supervillain is caused by the professor seeking revenge against a college bureaucrat threatening the professor’s budget.

Despite the fact that heroes and villains routinely use dimensional gateways, transporters, and other gadgets of every conceivable purpose and design, no explanation as to why they don’t just sell the patents, make a lot of money, and advance the rest of civilization by 500 years will be given.

Corollary #1: It will never occur to any super-villain scientist to say, “Hey, why am I knocking over banks? If I sell this bank-vault-door-melting invention to the right company, I’ll make MILLIONS!”

Corollary #2: In instances where the villain is already a multimillionaire, no explanation as to why he’s risking everything just to knock over a bank or make a guy in a cape look stupid will be made.

All creatures created in a lab will revolt against their creators, who may take time to make a speech about the folly of playing God before they’re killed.

All villains, most hero teams and many government agencies have access to devices, guns, spells, etc., that can deactivate the powers of captured heroes or villains unless their inability to control their powers is a major source of angst for the character in question.

Corollary #1: If villains actually do slap a power-nullifier collar (or whatever) on a hero with power control problems, that hero will never think to just hang on to the darned thing after defeating the villains.

Corollary #2: If a well-established hero’s powers become dangerously enhanced or begin to go out of control in the middle of the hero’s career, he or she will be allowed to find and retain a power-dampening device, but only to bring their power level back to their status quo.

Clones age to maturity instantly, and share the memories, skills, and physical conditioning of the original. Given time, they will usually revert to the original’s moral code, no matter what conditioning they may have received.

There will always be a reason why animal and human clinical trials will not be possible, thus requiring an otherwise brilliant scientist to decide to inject himself with his serum, often with horrendous — but never fatal — results.

Every good scientist, once made aware of the evil applications of his/her latest discovery or invention, will immediately destroy the plans and vow never to make it again. No discussion about why he/she would ever consider making a laser gun/weather machine/mind-control device in the first place will be entertained, and no other scientist will ever come up with the idea for creating the same device. 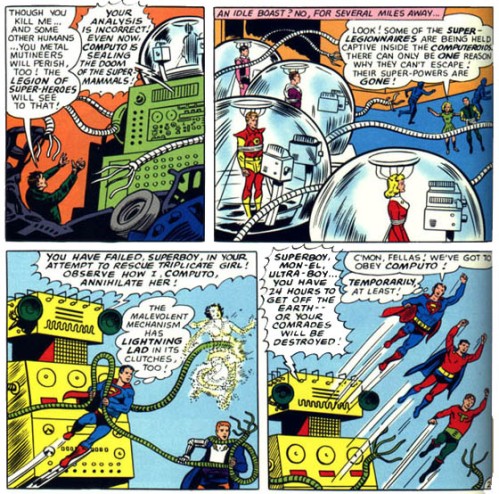 All supercomputers will eventually decide that destroying all humanity is the next logical step in their programming and go on a rampage, regardless of what that programming might be.

Heroes who use planes for transportation never have to concern themselves with; (i) explaining how their wimpy alter egos got a flying license without causing suspicion; (ii) airport and federal aviation authorities tracking their movements back to home base, or (iii) those annoying commercial airliners and military jets getting in the way of their unauthorized flight paths.

In situations where a hero’s secret base is a remote estate, the neighbors living in adjoining estates will never have cause to witness, say, an airplane emerging from a fake mountaintop.

All heroes, regardless of age, ability, or experience, can instinctively fly any flying object — even an extraterrestrial one — if given just a few seconds to look at the controls.

Heroes who fly on commercial airlines to follow criminals never have to worry about customs agents or airport security personnel finding weaponry or costumes in their luggage.

Corollary: Anyone who straps on a parachute and jumps out of a plane knows exactly how to do it, skydiving lessons be damned.

Those heroes that use really cool cars to fight crime will always have an ace mechanic on hand to keep the wheels running. The hero will also have a way to order extra parts for his/her unique vehicle without arousing the suspicions of curious auto-parts salespeople, weapons dealers, etc.

Hero teams’ vehicles have unlimited passenger capacity. There is always a seat for everyone, regardless of how small the vehicles may look on the outside.