Hey, Kids! Comics! Like, a Whole Bunch of Them!

I think one of the most emotional things I’ve done recently is return to my hometown after many years to see how much things have changed. (Spoiler: a lot.)

One of the big changes for me: all my favorite places to buy comics when I was a kid were either gone or no longer selling them. There was a time (specifically mid-1980s) when I could spend an entire day riding my bike from one store to the next, combing through spinner racks in search of four-color treasure. Now, though? The closest I could find were Avengers-themed kids’ books and Archie digests in the Walmart that moved in after I left town. Sigh…

But that’s progress for you, right? For all the cool things we enjoy today, there’s always something a trade-off, even if it’s something small like the joy of discovering a new comic on the rack. And let’s be honest, for all the cool comics I got to discover as a kid, that was nothing compared to the hundreds of comics available to kids every month in the 1940s and 1950s. Now that was a time to be a comic fan.

Your mission: Try to identify the year in which each of these photos were taken by looking at the comics in the photos. (Hint: click on the images to get a better view.) The answers are below, along with some notes about two of the comics in each photo. 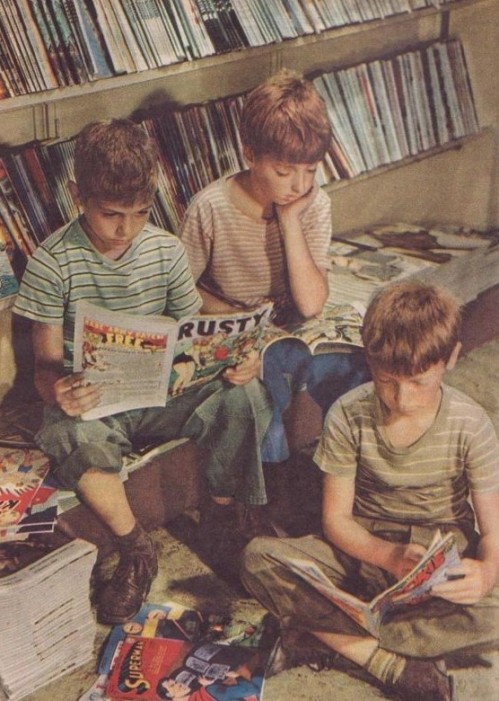 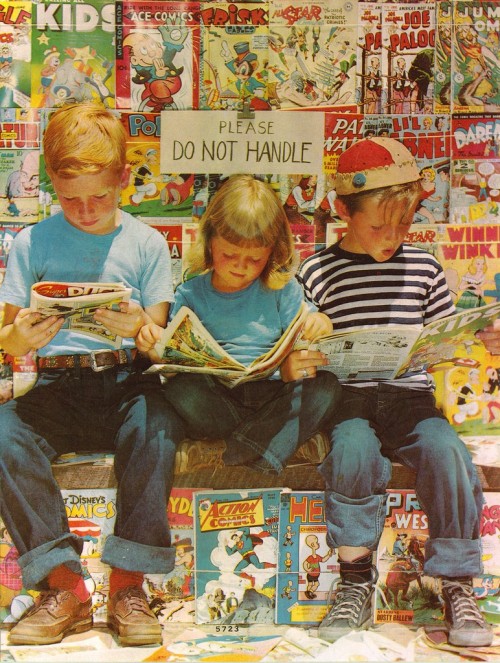 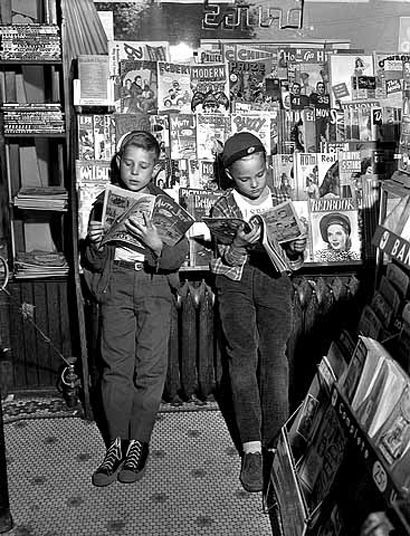 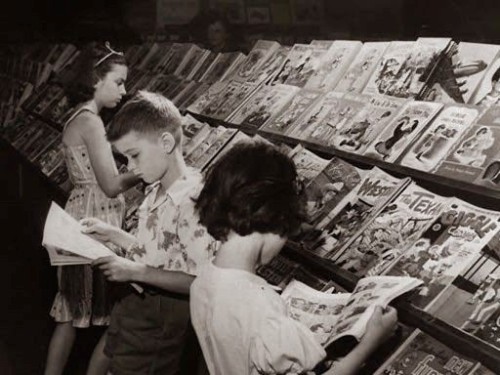 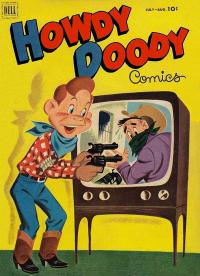 1. 1952. The blonde girl (second from the right) is holding a copy of Dell’s Four Color #408, featuring a classic Donald Duck story by Carl Barks, while the comic in the far left position on the top front row is Dell’s Howdy Doody #17, starring the massively popular TV puppet.

2. 1948. Two of the books clearly seen on the bottom row are DC’s Mister District Attorney #4, based on a radio crime drama that ran from 1939 to 1952, and Archie’s Suzie #63, starring one of the many teenage cut-ups who tried to replicate the Riverdale gang’s success. Emphasis on “tried.” 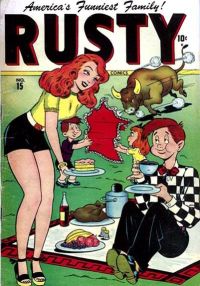 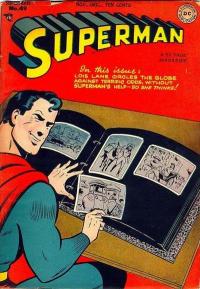 3. 1947. The boy on the left is holding a copy of Marvel’s Rusty #15. The series started out as Kid Comics in 1943, changed to Kid Movie Comics for one issue, then was renamed again to Rusty with issue #12; this title-jumping was a common practice at the time. Harvey Kurtzman, Basil Wolverton and Al Jaffee were among the future comic superstars who pitched in during Rusty’s reign as the book’s headlining star. Superman needs no introduction; this is issue #49 of his own title, with cover art by Superman stalwart Wayne Boring. 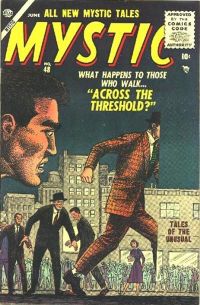 4. 1956. The top two titles in the row facing the camera are Marvel’s Mystic #48 and Matt Slade, Gunslinger #4, both cover-dated June 1956. Mystic was a sci-fi/horror title launched at the same time as Strange Tales; it ran until the collapse of Marvel’s distributor in 1957. Matt Slade, Gunfighter ran for four issues until it was renamed Kid Slade, presumably because of the popularity of Western characters named “Kid” back in the day.

5. 1942. The young lad is holding a copy of Timely’s Captain America Comics #12 in his hands; the cover story involves a scientist who uses a secret gas that turns people tiny-sized to rob and kill for him, and Cap and Bucky must figure out how to stop him after being shrunken themselves. Yikes! Directly behind the boy is Fawcett’s Captain Marvel Adventures #7, which saw the Big Red Cheese come up against the Ghost of the White Room, Dr. Sarr, The Wendigo and Captain Death. Ten cents went a long way back in those days. 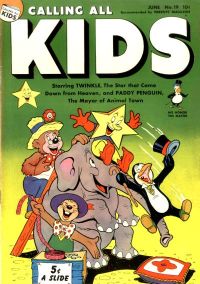 6. 1948. The comic on the bottom in the middle of the row is easily identified as DC’s Action Comics #120. “You can’t imagine what happened when Superman becomes Super-Stuntman!” the cover exclaims. I’m imagining the stuntman’s union raising a big stink over this. The comic held by the boy with the beanie is Calling All Kids #19 from Parents’ Magazine Press, a publisher that put out such wholesome titles as Real Heroes, Polly Pigtails and True Comics between 1941 and 1965. 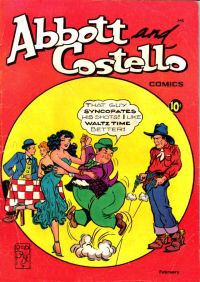 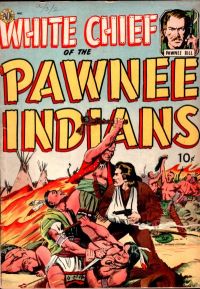 7. 1951. The comic on the top of the pile on the floor is Avon’s White Chief of the Pawnee Indians, a one-shot comic featuring fictional accounts of Gordon William “Pawnee Bill” Lillie, a Wild West show performer who worked with William “Buffalo Bill” Cody before striking out on his own. The Western craze of the 1950s is also evident in St. John’s Abbott and Costello #12, in which the famous comedy duo star in an adaptation of their 1947 film The Wistful Widow of Wagon Gap.

8. 1948. This was a year in which anti-comics hysteria reached a boiling point, with newspapers across the U.S. running stories on comic book burnings and people “cleaning up” the comics in their local stores. The man — who I presume is the store owner — seems happy enough to ham it up for the camera, but the two boys sure don’t seem excited to see their comics being swept away. It’s easy to see why Magazine Enterprises’ The Killers #2 was chosen for the shot, with the word “KILLERS” easy to pick out from the pile on the floor. Another book that might have faced the wrath of puritanical parents back then was Street & Smith’s Ghost Breakers #1 (lower left corner of the photo), what with its skull-faced phantoms reaching out from the cover.

9. 1945. The comic the boy is holding is Marvel’s Millie the Model #1, starring good-hearted Millie Collins and her fellow models, including good friend Toni and the catty Chili. The series is a rarity among Marvel titles as it ran without interruption from 1945 to 1972, thanks to the fans who submitted many hairstyle and fashion ideas to the book over the years. Holyoke’s Captain Aero Comics didn’t run as long — only 26 issues as far as I can tell — but it packed plenty of action thanks to Captain Aero, an American flying ace who fought the Nazis and the Japanese during World War II. Fun fact: this issue (#24, middle of the bottom shelf) showing bombers attacking Imperial Japan came out on newsstands September 1, 1945 — exactly one day before Japan formally surrendered to Allied forces, ending the Second World War. 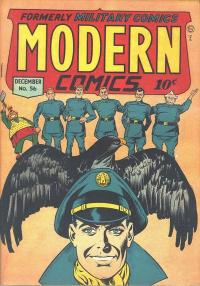 10. 1946. Debuting in 1907, the comic strip Mutt & Jeff is considered the first American newspaper cartoon to appear as a strip of panels (as opposed to a single panel), making it the first true “comic strip.” Mutt was the tall fellow obsessed with get-rich-quick schemes while the shorter Jeff was usually along for the ride; their strip lasted until 1983. Aside from their newspaper antics, the pair appeared on the cover of Famous Funnies #1, considered the first true American comic book, and DC published reprints of their strip from 1939 to 1958, with covers (like this one) by Sheldon Mayer. Modern Comics continued the numbering of Quality’s Military Comics starting with its November 1945 issue; you can probably guess why the editors made the change. The Blackhawks only appeared in the first story; the rest of the book is filled with humor strips starring the likes of Torchy, Choo Choo and Poodle McDoodle.

11. 1950. Starting at the far right, ACG’s Giggle Comics promised exactly that: loads of laughs courtesy of Superkatt (the cat in the diaper), Spencer Spook, Biffy Bear, Duke and the Dope, and other funny-animal creations. It lasted 99 issues, from 1943 to 1955. Things were less jolly over in the pages of St. John’s The Texan, where rustlers, outlaws and the “Ghost Terror of the Blackfeet” were all in a day’s work for the lawmen patrolling the Wild West. 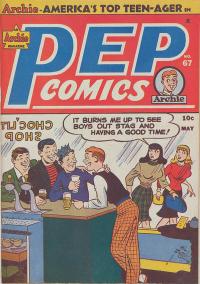 12. 1948. When he first appeared in novels and short stories, the fictional Hopalong Cassidy was a rude, crude kind of dude with a wooden leg that caused him to “hop along,” as it were. The movies turned him into yet another well-spoken and polite cowboy who moseyed in when dishonest types took advantage of law-abiding citizens. Just in case you thought this “sanitized for Hollywood” business was a recent thing. In all, 66 Hopalong Cassidy films were released, and the 1949 Hopalong Cassidy TV show was the first network Western series. Fawcett’s series featuring photo covers of Hopalong star William Boyd ran 85 issues, with DC continuing the book when Fawcett folded. MLJ’s Pep Comics debuted in 1940 and featured the adventures of the Shield, the Hangman and other hero types until Archie arrived on the scene; by 1948, his takeover of the title — and America’s collective heart — was nearly complete. 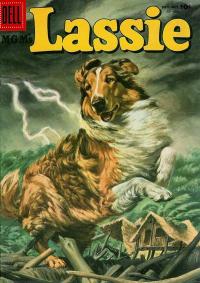 13. 1956. From an online synopsis of the first story in Dell’s Lassie #30: “Bandits, who have taken crop money from Rocky, take refuge in Rocky’s homestead. Lassie and Timbu save the day by laying traps for the bandits to fall into.” And now all I can picture is Lassie going full Home Alone on poor Joe Pesci. Hollywood’s most famous canine enjoyed almost uninterrupted comic-book coverage between 1950 and 1969. The brilliant simplicity of Ernie Bushmiller’s Nancy newspaper strip made for an easy transfer to comic books, with the trouble-making kids appearing in United Comics, Tip-Top and Sparkler Comics, the latter turning into Nancy and Sluggo with issue #121. Notice how the Lassie book isn’t sporting a CCA stamp; Dell, confident in its reputation for wholesomeness, refused to submit its books for CCA approval and instead published its “Pledge to Parents” in its comics.

14. 1949. “Tours around the world in 80 minutes.” Hmm, the circumference of the Earth is about 40,000 km, so going around the world in 80 minutes means travelling at (checks the calculator) 30,000 km/h. Let’s hope that bus has seat belts. And that Superboy doesn’t have to make any sudden stops. Meanwhile, I love the look on the boy’s face as he’s reading a comic starring the Three Little Pigs. Sure, the photo was probably staged, but that’s fine — I just like imagining an America where kids that age get excited reading stories about pigs and magic lamps.

15. 1947. Positioned right behind the little girl’s head is a copy of EC’s Picture Stories from American History, a short-lived (four issues) series that printed non-fiction accounts of the explorers, patriots and presidents of American history. This issue came out shortly before EC publisher Max Gaines was killed in a boating accident, leading to his son William taking over the business and eventually launching his groundbreaking line or horror, war and science-fiction books. Slightly less groundbreaking was Fox’s Zoot Comics, a humor/funny-animal book that switched to jungle queens immediately after this issue. 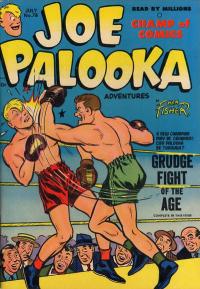 16. 1953. Of all the titles we’ve seen so far, I think Muggy-Doo Boy Cat is my favorite (wouldn’t that make him Muggy-Doo Kitten?). Other silly names in this four-issue series from Stanhall include Orry Orangutan, Voodoo Vermin, Elmer the Elk and Stuffy Derma, which sounds more like a mild medical condition to me. Harvey’s Joe Palooka, based on the popular Ham Fisher newspaper strip, ran from 1945 to 1961. Starting with reprints, the series eventually took the all-American boxer into all kinds of adventures outside the ring.