I Think Some of Their Writers Might Read Comic Books

1. Supercilious comic shop owners
“I can’t tell you how many times people have come up to me and said, ‘I know who you based that comic book guy on. It’s that comic-book guy right down the block,’” Simpsons creator Matt Groening once said in an interview. “And I have to tell them, ‘No, it’s every comic-bookstore guy in America.’”

2. Overly obsessive comic speculators
In Season 2’s “Three Men and a Comic Book,” Bart, Milhouse and Martin pool their money to buy a copy of Radioactive Man #1 for $100. Their attempts to preserve the rare book’s condition go so far as to sterilize the tweezers they use to turn the book’s pages.

3. Slightly pointless arguments about superhero match-ups
[Bart drives by in a stolen tank]
Comic-Book Guy: Egad — a maniac cutting a swath of destruction!  This is a job for the Green Lantern, Thundra, or possibly… Ghost Rider.
Otto: Well, what about Superman?
CBG:  Oh, please.

4. Casper the Friendly Ghost
Bart: Ah, what do you care about good comics?  All you every buy is Casper the Wimpy Ghost.
Lisa:  I think it’s sad that you equate friendliness with wimpiness, and I hope it’ll keep you from ever achieving true popularity.
Bart:  Well, you know what I think?  I think Casper is the ghost of Richie Rich. [shows comics of Casper and Richie Rich]
Lisa:  Hey, they do look alike!
Bart:  Wonder how Richie died.
Lisa:  Perhaps he realized how hollow the pursuit of money really is and took his own life.

6. Jack Nicholson’s turn as the Joker
In “Last Exit to Springfield,” the scene where Lisa reacts to her new braces by smashing a mirror and laughing maniacally is directly based on the scene in 1989’s Batman movie in which Jack Nicholson’s character first sees his chemical-ravaged features.

7. Archie and his pals
In “Sideshow Bob Roberts,” Archie Andrews, Reggie Mantle, Moose Mason and Jughead Jones pull up to the Simpsons’ house and toss Homer out of the car, warning him to “stay out of Riverdale.” Later, Homer reads an Archie comic and mutters to himself about those “stuck-up Riverdale punks.”

8. That scene in Superman Returns that totally overplays the whole “Superman as a Christ figure” thing
Homer: I’m not normally a praying man, but if you’re up there… please save me, Superman!

9. The preposterous preponderance of radiation accidents in superhero origin stories
In “Desperately Xeeking Xena,” one of the shorts shown in “Treehouse of Horror X,” Marge takes Bart and Lisa to Springfield Elementary, where Chief Wiggum is running an X-ray machine to inspect candy. As Nelson’s extremely bulky pillowcase of goodies is being scanned, the X-ray machine explodes, with the subsequent exposure to radiation giving Bart the ability to stretch his body like rubber while Lisa gains extraordinary strength. They become a superhero duo, calling themselves Stretch Dude and Clobber Girl.

10. The Super Friends
Dr. Hibbert: My prognosis… or is it diagnosis?  Whichever.  You need to avoid stress.  What kind of work do you do?
CBG: I run a comic book store.
Dr. Hibbert: Oh, dear Lord!  We call that profession “the widow-maker.”  Or we would, if any of the proprietors were married.  You should close down the store for a while.
CBG: But I’d lose all my business to Frodo’s of  Shelbyville.
Dr. Hibbert: Then get a friend to run it for you. You do have friends, don’t you?
CBG: Well, the Super Friends.
Dr. Hibbert: You should get some friends who aren’t printed on paper.
CBG: What, you mean action figures?

11. Shoddy corporate-sponsored comics
When Bart and Milhouse run the comic shop during Comic Book Guy’s absence, a fast-talking comic salesman convinces Milhouse to buy 2,000 copies of Biclops, starring the first superhero with glasses.
Bart: How could you spend all of our money on a comic book published by Lenscrafters? We’ll never sell these! Birds won’t even use them in their nests!

12. The shameless hucksterism of one Mr. Stan Lee
Stan Lee: Hold it, son. Wouldn’t you rather have an exciting action figure?
Kid: But Batman only fits in my Batmobile.
Stan Lee: Are you nuts? The Thing fits in there perfectly [stuffs oversized Thing action figure into the Batmobile]. Look, he’s fitting right now.
Kid: You broke my Batmobile!
Stan Lee: Broke or made it better?

14. Spider-Man’s sixth sense for knowing when danger is near
Lisa: [shouting out her window] I’m a Buddhist! Hey, I’m a Buddhist!
Ned [sitting at home]: My Satan-sense is tingling! Into the root cellar, boys!
Todd: When can we come out?
Ned: Maybe never.
Rod/Todd: Yaaaay!

15. That scene in the first Spider-Man movie in which Spider-Man and Mary Jane share a kiss in the rain
In “Simple Simpson,” Homer becomes the masked Pie-Man and throws a pie in the face of a contest judge that hurt Lisa’s feelings. Feeling good about doing good, he decides to continue his life of vigilantism. At one point, he saves Marge from a stampeding crowd and she rewards him with a kiss as he hangs upside down from a rope. Not realizing the Pie-Man is Homer, she notes that he “tastes familiar.” The montage of Homer constructing his costume is also based on a similar montage in the movie.

16. The Thing’s classic battle cry
After Mr. Burns discovers who the Pie-Man really is, he blackmails Homer into pieing victims of his own choosing, including a cookie-selling Girl Scout and the Dalai Lama. When Homer is reluctant to carry out his mission, Mr. Burns tells him, “It’s cobblering time!”

17. Robert Crumb
In “Treehouse of Horror XV,” Professor Frink shows a drawing of a “retro-virus” drawn in a style that resembles that of Robert Crumb, who may actually have drawn it for the show to use.

18. J.K. Simmons’ definitive portrayal of J. Jonah Jameson
When Lisa encourages Moe to publish his poetry (“Moe’n’a Lisa”), he takes his work to a poetry magazine run by a fast-talking publisher who sounds and looks a lot like Spider-Man’s hard-to-please boss. Little wonder why – the voice is supplied by the same actor who plays Jameson in all three Spider-Man movies. He even uses a quote from Spider-Man 3 (“What are you waiting for, Chinese New Year?”) and later demands photos and poems about Spider-Man.

19. The theme song from the 1960s Spider-Man cartoon
Homer [singing]: Spider-Pig, Spider-Pig/Does whatever a Spider-Pig does/Can he swing from a web?/No he can’t, ‘cause he’s a pig/Look out, he is a Spider-Piiiig…. 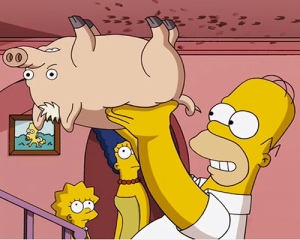 20. Interminable movies starring certain green giants with anger management issues
One of the many film titles spotted at the Springfield Googolplex: The Unwatchable Hulk

21. Hollywood adaptations of superhero comics that don’t live up to the source material
In Season 21’s “Homer the Whopper,” Comic Book Guy publishes a comic about Everyman, a superhero who can take on the powers of any other hero. When a Hollywood studio wants to make a movie based on the character, they go with Homer (of course) for the lead role. A trainer is brought in to get Homer into shape, but Homer starts overeating again when the trainer leaves for another client. The final version of the film shows footage of both fit Homer and fat Homer in a movie that wasn’t that well-written to begin with, and Comic Book Guy can’t bring himself to say he liked it, even when given the chance to direct the sequel.

Lisa: There were a lot of holes in your story.
Studio Exec: That’s the problem when you have 17 writers. But don’t worry, we have two fresh ones working on it [cut to Maggie and monkey banging at typewriters].

22. Comic writers who put themselves in the middle of the action
Daniel Clowes: Oh, no! The store is in trouble!
Alan Moore: League of Extraordinary Freelancers activate!
[They all tear off their shirts]
Art Spiegelman: [puts on mouse mask] Maus is in the house!

23. Modern-day revisionist interpretations of beloved comic-book icons (and the fans that don’t quite get them)
Bart: Alan Moore! You wrote my favorite Radioactive Man comics.
Alan Moore: Oh, really? You liked how I made your favorite superhero a heroin-addicted jazz critic who’s not radioactive?
Bart: I don’t read the words, I just like it when he punches people.

24. Ironic yet fitting justice served to costumed ne’er-do-wells
In “Bartman Begins,” one of three mini-episodes in “Revenge is a Dish Best Served Three Times,” viewers saw the origin of Bartman, from the tragic death of his parents to his final confrontation with Serpent, a.k.a. Snake Jailbird, the man who gunned down Homer and Marge. When Serpent attempts to steal the “Stealable Jewels of the Orient” from the Gotham Natural History Museum, Bartman arrives, saves the jewels, and kills Serpent by impaling him on the fangs of a snake statue.

25. The Bat-Signal
[Homer’s silhouette is projected by the lighthouse, making him visible to all Springfield, including his own children, who are brushing their teeth.]
Bart: Hey look! Is that Dad?
Lisa: Either that, or Batman’s really let himself go.

26. “Hulk smash!”
Homer resolves to work on his anger-management issues just as Bart’s “Angry Dad” cartoon is becoming an Internet sensation. To get new material for his show, Bart provokes his dad with a booby trap involving cactus plants, dirty diapers and a wading pool full of green paint. The enraged and emerald-hued Homer then goes berserk in downtown Springfield, punching parking meters and yelling “Homer smash!” before he’s subdued by police.

28. “Don’t call me chief!”
In “Fraudcast News,” Lisa takes Bart to task for calling her “chief” – a direct reference to the Superman books in which Daily Planet editor Perry White frequently orders cub reporter Jimmy Olsen not to call him by that name.

29. Just about everything else